The village of Spello (Italy) stands on the slopes of Mount Subasio; since it is a very small village, it can be visited in one day.
So what to see in Spello in a day? Here is a mini but comprehensive guide. Italy’s best-preserved Roman fortified walls, the works of Pinturicchio, Perugino’s frescoes: these are just some of the things to see in the village. Spello is also known for its magnificent Infiorate, floral compositions created every year on the occasion of Corpus Domini.
Besides, Spello is part of the association of the “Most Beautiful Villages in Italy” (Borghi più belli d’Italia) of the Italian Touring Club.

What to see in Spello: 5 must-see attractions

Spello still preserves the signs of long Roman and Longobard domination.
There are numerous remains from Roman times when the village, called Hispellum, was the “splendidissima colonia Julia“, as can be read on a sign on the facade of Portonaccio.
From these centuries of splendour we have the best preserved Roman fortified walls in Italy, with 3 magnificent entrance gates. The main gateway to the village is Porta Venere with the Properzio Towers; then we have Porta Urbica and Porta Consolare decorated with three funerary statues and a tower topped by an olive tree (the best known local product).
Below you will find the 5 main tourist attractions of Spello that you can visit in one day.

The Church of Santa Maria Maggiore in Spello

The Church of Santa Maria Maggiore was built in the 12th century on the remains of a pagan temple.The romanesque bell tower is located on the left side of the Church and it preserves two ancient bells: one from the 13th century and one from the 15th century.
The Baroque interior, with a single nave, preserves an authentic treasure: the Baglioni Chapel, floored with magnificent Deruta majolicas (1566). The Chapel is decorated with one of the most colourful cycles of frescoes by Pinturicchio (1501) depicting “The Annunciation”, “The Adoration of the Shepherds” and “The Dispute of Jesus with the Doctors”.
On the pillars of the presbytery there are two frescoes by Perugino.

The Church of Sant’Andrea in Spello

A few steps away from the Church of Santa Maria Maggiore, there is the Church of Sant’Andrea. It is a Franciscan Church of 12th-century origin.
Although the exterior of the Church is quite anonymous, inside it preserves several works of art of great value: such as a fresco by Dono Doni from 1565 and a Crucifix on wood from the Giotto school.
But the most important work of art is the altarpiece depicting “The Madonna and Child Enthroned with Saints”, painted by Pinturicchio in 1508.

The 16th-century Palazzo dei Canonici has housed the village’s Civic and Diocesan Art Gallery since 1994. The Pinacoteca houses paintings, sacred objects, goldsmiths’ work, sculptures and frescoes.
Among the works that give evidence to the artistic production and local devotion there are: “The Madonna Enthroned” (a polychrome wooden sculpture from the 12th – 13th century), a fresco depicting “The Madonna and Child between St Girolamo and St Bernardino”, “The Madonna and Child” attributed to Pinturicchio and the urn of San Felice containing the relics of the patron Saint of Spello.

The tiny Tega Chapel is a little gem, located in the old town of Spello. It was originally born as the seat of the confraternity of the “Disciplinati di Sant’Anna“; it was later home to a tailor’s workshop, Pietro Tega. He, in 1921, discovered the valuable wall paintings that had been covered by plaster until then. Restoration work brought to light 15th-century frescoes by Nicolò Alunno and Pietro di Mezzaforte, depicting: Saint Anne, the Madonna and Child, a Crucifixion, six busts of Apostles and the vision of Heaven and Hell.

Villa of the Mosaics

The Villa of the Mosaics in Spello was one of the most extraordinary discoveries in recent years (2005). It is a Roman monumental complex with a mosaic floor of about 500 metres, a real spectacle!

There are twenty rooms, among them are the Bird Room with mosaics recalling hunting and good food, the Amphorae Room referring to the production of wine and the dining room used for banquets with mosaics dedicated to Bacchus.

Balconies, alleys and corners of the village are always adorned with colourful flowers. That is because Spello has a great tradition in the use of flowers, which reaches its climax with the Infiorata (flower festival).

The Infiorata is the village’s main historical and religious festival. It takes place every year on Corpus Christi day (the ninth Sunday after Easter); for this reason there is no precise date. Usually it takes place between May and June. For the flower festival, large floral paintings are composed, forming almost one giant carpet of flowers around the village. It consists of carpets – ranging in size from 12 to 15 metres in length – and squares – from 25 to 90 square metres each – which make up approximately one and a half kilometres of Infiorata.

All this in order to honour the passage of the Body of Christ carried in procession by the bishop on that day.

The Spello flower festival dedicated to Corpus Domini dates back to around 1930 and, over time, it has also become a competition: on Sunday morning, before the procession, a jury judges and awards the best Infiorata. 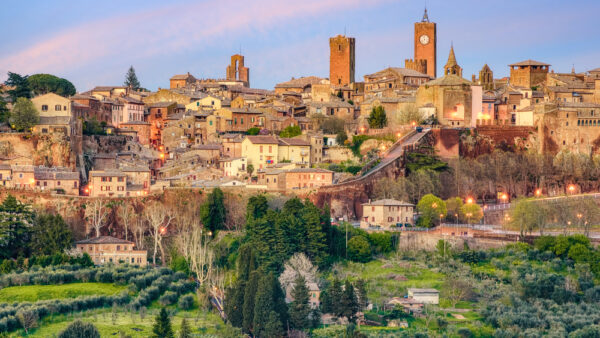 Orvieto: the town that looks like it came out of a postcard

The town of Orvieto, in Umbria, stands on a tufa cliff. It has been called “the strange high city” and it is…
By Traveling ItalyNovember 9, 2021