Ostuni (Italy) is a charming Italian town in the province of Brindisi, Apulia. The village is perched on three hills and it rises in the area known as Valle d’Itria. Ostuni is also called “White City”, the nickname is due to the white lime used in the building of the houses, especially in the old town.

The town is well known for its characteristic historic centre and for its sea, which since 1994 has received the annual Blue Flag Award from Legambiente, for its clear and clean waters. Ostuni is a popular and coveted tourist destination, which hosts tourists from all over the world every year.

The historic centre of Ostuni is called “La Terra” by its inhabitants: it is characterized by a lot of narrow streets, alleys, staircases, squares, small workshops of artisans and shops of typical products of the area. The lower part of the village is surrounded by the ancient city walls. Here there are the two entrances to the town (that have remained intact) are set: Porta Nova and Porta San Demetrio.

The Cathedral of Ostuni

One of the most important attractions of the town is the 15th-century Cathedral that rises on the top of the hill, ordered by Ferdinand of Aragon and Alfonso II, rulers of the Kingdom of Naples.

The Cathedral is built in Gothic-Romanesque style with a marvellous rose window with 24 rays, one among the largest in the world. The façade has three elegant ogival portals and a three-nave interior, with a precious painted ceiling and beautiful Baroque chapels.

The works inside the Cathedral include a marble baptismal font and a beautiful altar, decorated with an 18th-century painting by Domenico Antonio Vaccaro.

The Museum of Preclassic Civilizations of Southern Murgia

In the neighbourhood of the Cathedral, there is another place that is worthy of attention: the Museum of Preclassic Civilizations of Southern Murgia. It is located in the place where there was once a Carmelite monastery.

The most important work on display undoubtedly is the Cast of Delia – a pregnant woman who lived 25,000 years ago – found in a cave near Ostuni in 1991. Other works include evidence of cults and female divinities from the Paleolithic to the Christian era.

The 18th-century Palazzo dell’Episcopio houses the Diocesan Museum of Ostuni. The museum preserves the remarkable historical and artistic heritage of the town Church.

In addition, it houses testimonies and masterpieces of great importance, such as the archaeological collection from the Messapian period, various liturgical vestments from the 18th century and a beautiful anatomical wax Christ.

The patronal feast of Sant’Oronzo

During the summer period, the program of festivals and events in the town is very wide. A special attention should be given to the patronal feast of Sant’Oronzo, which takes place on 25th, 26th and 27th August.

The feast has ancient origins, dating back to 1657.

The statue of the Saint is carried on horseback by the faithfuls; they wear typical clothes of that time, while the horse is dressed with a red embroidered drape. During the procession, the local band plays the theme of the Cavalcade and they go around the whole old town.

Sant’Oronzo cavalcade is one of the most awaited feast for the inhabitants, but, every year, it attracts many tourists, curious and faithfuls who come to Ostuni from near and far cities.

To have a more local experience, Ostuni market is a must. It takes place every Saturday from 8 a.m. to 1 p.m. and it runs along Via Gabriele D’Annunzio. Ostuni market is the best place to shop for local products at unbeatable prices: fresh fish, seafood, vegetables and local bread specialties such as taralli.

The beaches of Ostuni

If you are visiting Puglia in summer, you should not miss the chance of spending a day at one of the many beautiful beaches in Marina di Ostuni.

Ostuni’s coastline stretches for over 17 kilometers and it is characterized by different types of beaches (sand, rock), covered by the typical Mediterranean vegetation. The most popular sea areas are Torre San Leonardo, Lido Morelli, Rosa Marina, Monticelli (ideal for families) and Costa Merlata, for those who love the rocky coast.

Along the coast is also located the Natural Park of the Coastal Dunes, where you will find small lakes of brackish water. 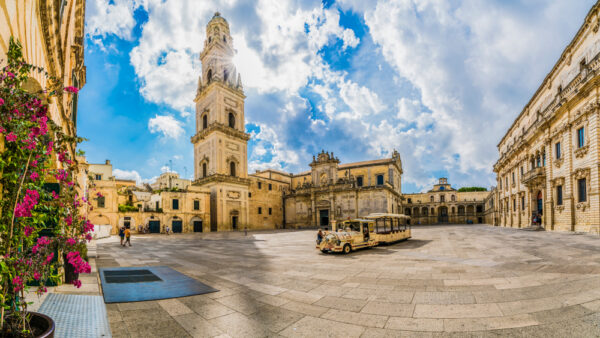 The most beautiful baroque city in Apulia: Lecce

Lecce, Puglia, lies in the middle of the Salento region and it is considered one of the most culturally beautiful cities in…
By Traveling ItalyNovember 12, 2021 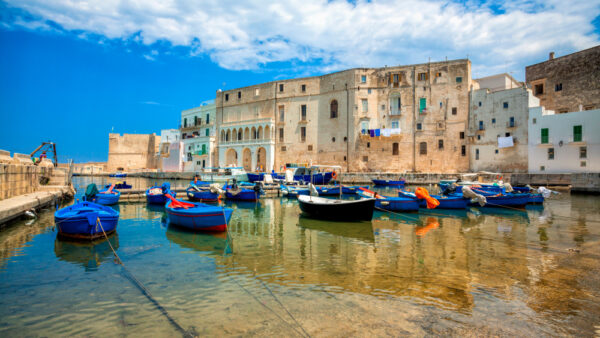 Useful tips you need to know about Monopoli

Monopoli is a corner of Apulia that hardly leaves you indifferent: a seaside town that combines the authentic atmosphere of a fishing…
By Traveling ItalyOctober 27, 2021