Lecce, Puglia, lies in the middle of the Salento region and it is considered one of the most culturally beautiful cities in Italy. Its origins date back to the Messapian era, but its fame derives from the richness of its 17th-century Baroque architecture. For this reason the city is nicknamed the “Lady of Baroque”: a more than appropriate name for this magnificent open-air museum.

Lecce is the perfect destination to combine a few days of relaxation and culture: churches, castles, historic buildings and picture-postcard beaches.

Here you will find the necessary information on the most important attractions of this baroque capital of Southern Italy and some ideas for organising your wonderful holiday.

Things to do in Lecce: 6 must-see places

Lecce is known as the “Lady of Baroque” and it is here that you can admire the Baroque art that characterises spires, portals, churches, monuments and houses in the old town. The historic centre can be accessed through three gates: Porta Napoli, Porta Rudiae and Porta San Biagio. Here are some of the most important streets in Lecce, lined with elegant palaces and interesting craft shops.

The Cathedral of Lecce

In Piazza Duomo, a triumph of Lecce Baroque, stands the Cathedral of Lecce. It is dedicated to Maria SS. Assunta and it was built in 1144. In 1659, the architect Giuseppe Zimbalo built the adjacent 5-storey bell tower; the top storey is surmounted by an octagonal dome on which an iron statue of St. Oronzo is placed.

The Cathedral has two entrances: the façade of the main entrance – on which four statues are sculpted – is very sober and refined; the façade of the secondary entrance, on the other hand, is more opulent, it is designed along the lines of Lecce Baroque and it is decorated with the statue of Saint Oronzo between the statues of Saint Just and Saint Fortunato.

The interior of the Cathedral, decorated in Lecce stone and marble, is obviously Baroque in style and it is divided into three naves. In addition to numerous canvases of great artistic value, twelve altars adorned with beautiful paintings are preserved here. Not to be missed is the Crypt dedicated to Santa Maria della Scala: a sober and luminous setting in Lecce stone.

Tickets: Cathedral and Crypt €5. You can book your ticket online here.

Near Piazza Sant’Oronzo stands the Castle built by King Charles V in 1539. The castle was built on a pre-existing 14th-century fortification and features two concentric structures separated by an intermediate courtyard, four corner bastions, massive walls and a now-filled moat.

Today the Castle is the seat of the Department of Culture and its rooms are used for cultural events, art exhibitions and food and wine events.

The Roman Amphitheatre and Theatre of Lecce

The Roman Amphiteatre and Theatre are the most important evidence of Roman times.

The Amphitheatre dates back to the 2nd century AD and it was used for entertainment purposes. The structure is located in the centre of Piazza Sant’Oronzo; however, the part found is only a third of the entire original structure. Today, it is used for theatrical performances and concerts.

The Theatre, built at the same time as the Amphitheatre, is a hidden treasure: located between buildings and narrow streets, it is not easily visible. It also has an adjoining museum, the Museo del Teatro Romano, where are displayed some of the artefacts found during the excavations.

The Churches of Lecce

Among Lecce’s many nicknames there is “City of 100 Churches”. Scattered around the historic centre, in addition to the beautiful Cathedral, are a multitude of other sacred buildings.

Among those that are definitely worth a visit there is the Basilica of Santa Croce with the adjacent Convent of the Celestines. This complex represents the highest manifestation of Lecce Baroque: decorations carved in stone, a triumph of friezes, bas-reliefs and sculptures made of local stone.

As well as being a popular cultural tourist destination, the Salento area in Lecce has become one of Italy’s most popular seaside destinations over the last 15 years.

One of the reasons is the beauty of the sea, as crystal clear as can be found in few other places in the Mediterranean. In Lecce there are some of the most beautiful beaches in the world: Punta Prosciutto, Punta della Suina, Porto Selvaggio and many others. Another reason is the hospitality of the people of Salento.

Lecce is a city rich in culture and history, but as the sun goes down, it reveals a completely different face, more goliardic and fun-loving. Lecce’s main nightlife areas are concentrated between Piazza Sant’Oronzo and the Church of Santa Chiara and near Porta San Biagio. Although the clubs are scattered throughout the city.

TravelingItaly has selected three places that we think are unmissable for having fun in Lecce at night, between a cocktail and some music:

Useful tips you need to know about Monopoli

Monopoli is a corner of Apulia that hardly leaves you indifferent: a seaside town that combines the authentic atmosphere of a fishing…
By Traveling ItalyOctober 27, 2021 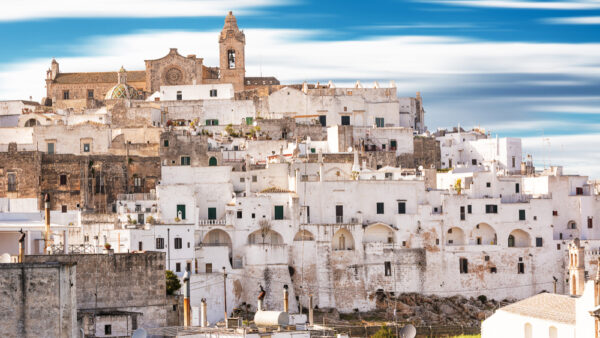 Ostuni (Italy) is a charming Italian town in the province of Brindisi, Apulia. The village is perched on three hills and it…
By StaffOctober 21, 2021