Benevento is a city located in the Campania hinterland, surrounded by natural beauty and rich in history, culture and culinary excellence.

In the past it was a Samnite, Roman, Lombard and then Papal city. Each era has left important historical legacies and testimonies, which still today represent the distinctive signs of its cultural sphere.

Places to visit in Benevento

One of the things to see in Benevento is undoubtedly the Arch of Trajan. This is a celebratory arch, erected in 114 A.D. in honour of Emperor Trajan. Today the work is intact overall, one of the best preserved arches in Italy. It is more than 15 metres high and almost nine metres wide.

Benvento Cathedral, dedicated to Santa Maria de Episcopio and consecrated in 780, is the city’s main place of worship.

Despite suffering heavy bombardment during World War II, the bell tower and façade have been almost completely recovered. They date back to the end of the 13th century and they are united by the choice of white: the bell tower is built of white stone, while the façade of white marble.

One of the most evocative places inside the Cathedral is the crypt – the only surviving building after the bombings – which contains a pictorial cycle dating back to the 9th century.

Padre Pio of Pietrelcina was a priest at Benevento Cathedral in 1910.

Church of Santa Sofia in Benevento

Another religious building not to be missed is the Church of Santa Sofia. The building was erected in 760 by the Lombard population and, today, it represents one of the best preserved examples of early medieval architecture in Italy.

Attached to the Church is a Monastery with a beautiful cloister, which now houses part of the Sannio Museum (where it is possible to learn about the history of Benevento and its province, from prehistory to the modern age).

The Church has been on the UNESCO World Heritage List since 2011.

The Castle of Benevento, also known as the Rettori Fortress, has an extremely high level of charm because it is the result of several overlapping constructions from different and distant periods. In fact, it was able to combine Roman, Samnite and medieval art.

The building looks almost as if it were divided into two parts: the corner tower – which is the strictly Lombard part – and the rectangular Palazzo dei Governatori Pontifici, which is the more medieval part.

Today it is the seat of the province of Benevento, and it houses a permanent exhibition “Uomini eccellenti, tracce del risorgimento Beneventano”.

Only brought to light in the last century, the Roman Theatre was built under Emperor Hadrian and finished by Caracalla. Originally consisting of three orders of twenty-five arches, today only the first order and part of the second order have survived.

Today the Theatre is one of the jewels in the crown of Benevento’s monumental heritage and is well preserved, thanks above all to the numerous restorations carried out.

The city of witches

You cannot visit Benevento without knowing its distinctive features. In fact, the city, as many people know, is also known as the “city of witches“, due to a famous legend.

It is said that some women used to gather around a large walnut tree at night, to give life to a demonic sabbath made of banquets, dancing and singing. Witches are also said to have flown to the site on broomsticks.

The inquisitors put an end to this phenomenon with the “witch-hunt”, which tortured and burned many women accused of witchcraft.

With its predominantly agricultural vocation, Sannio is a land of great wines and simple but intense flavours.

For example, brawn and sausages are the basis of very tasty traditional local dishes. But the Benevento area is also renowned for its cheese production: such as the Caciocavallo DOP, which can be enjoyed with the famous taralli di San Lorenzello, seasoned with spices and herbs.

In several areas of the province of Benevento, the Mela Annurca Campana – which has been awarded the PGI mark – is widespread. 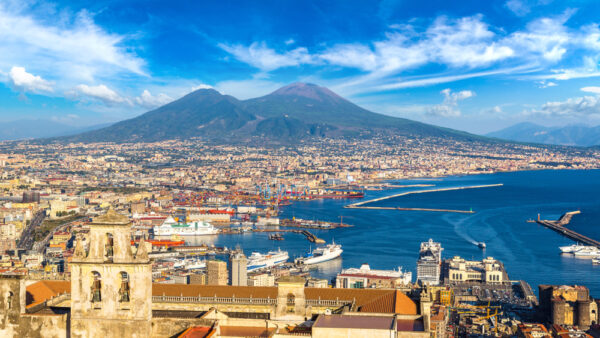 Best things to do on a weekend in Naples

There is so much to see in Naples (Campania) and it is not easy to choose. The city enraptures you with its…
By Traveling ItalyNovember 30, 2021