Cosenza is one of the most beautiful cities and one of the richest in art, history and culture in Calabria and southern Italy. It is no coincidence that it is known as the “Athens of Calabria”, thanks to the important cultural value it had between the 15th and 16th centuries.

The city was also the birthplace of Bernardino Telesio, a famous philosopher and naturalist from the 1500s.

Cosenza stands on seven hills (like Rome) and it is located in the centre of the valley where the Crati and Busento rivers meet. In 2008, the city was recognised as a “City of Art” thanks to its historic centre, which contains artistic and architectural gems of extraordinary beauty, as well as many examples of contemporary art to be discovered.

If you haven’t visited Cosenza yet, now is the time to do so.

What to see in Cosenza in one day

One day to discover the whole city is not enough, but it is enough to visit the most interesting attractions. You can easily get around on foot to visit these places.

The imposing Svevo Castle, architectural symbol of Cosenza, soars over Pancrazio Hill. It was built by the Saracens, after the year 1000, on the ruins of the ancient Bruzi fortress.

Today, the Castle hosts cultural events and, from here, it is possible to enjoy a beautiful panoramic view of Cosenza and the Sila mountains.

In the new part of Cosenza, along the city’s main pedestrian street – Corso Mazzini – there is the MAB: Museo all’Aperto Bilotti. It was set up in 2006 and enriched over the years, it is one of the few examples of Open Air Museums in the world and is unique in the city’s art scene.

The old town is the real heart of the city, where you can taste the true essence of Cosenza. Many of the must-see attractions are located here. It is a real village within the city. For this reason, in 2020, Cosenza Vecchia became one of the “Borghi ad Honorem” of the Italian Touring Club’s “Most beautiful villages in Italy” association.

The main street of the old town is Corso Bernardino Telesio, known in the past as ‘Via dei Mercati’ for its commercial vocation and historic shops. The Cathedral of Cosenza is located along this street.

The 13th-century Cathedral, dedicated to Santa Maria Assunta, was declared a “Heritage Witness to Culture and Peace” by UNESCO in 2012. The façade of the Church features Cistercian-Gothic architecture, while the interior is decorated in Romanesque and Baroque styles. One of the most important works housed inside the Cathedral is the Icon of the Virgin of Pilerio, the patron Saint of the city. Other work to be admired is the Mausoleum of Queen Isabella of Aragon, dating from the 13th century.

Continue along Corso Bernardino Telesio to reach Piazza XV Marzo. In the centre of the square stands the Monument dedicated to Bernardino Telesio, surrounded by prestigious buildings: the Rendano Theatre, the Accademia Cosentina, the Palazzo del Governo and the Villa Vecchia.

We recommend to stop at the city’s historic café: the Gran Caffè Renzelli, located in Piazza Parrasio. A meeting place for various intellectuals, whose photos are now housed in the rooms of the bar.

The confluence of the rivers Crati and Busento are the protagonists of one of the most fascinating events in history: the legend of Alaric I, king of the Visigoths, and his treasure.

It is said that Alaric, in 410, after sacking Rome, came to Cosenza, where he suddenly died. The warriors decided to bury their king at the confluence of the Crati and Busento rivers, together with his horse and loot. 25 tonnes of gold, 150 tonnes of silver, jewellery, coins and all kinds of valuables: this is what Alaric‘s famous treasure contained.

The legend of Alaric, his burial in the river and his treasure remained a mystery, but for centuries inspired the verses of great artists such as Dumas and Carducci. The first treasure hunt was also announced in 2015.

Truth or legend, a statue of Alaric by Paolo Grassino stands at the confluence of the rivers today. 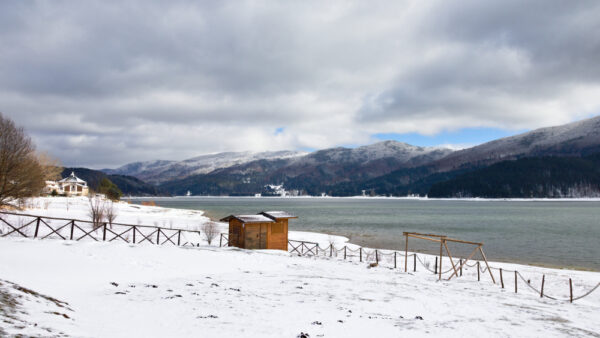 Today, Traveling Italy is in Calabria, in the heart of the Sila National Park: Lorica, where wild nature reigns supreme. Lorica (from the…
By StaffOctober 20, 2021