The Abruzzo National Park was established in 1923 to safeguard its exceptional natural features and to save certain wild animals from extinction. It covers 50.000 hectares in the heart of the Central Apennines, between Abruzzo, Lazio and Molise and comprises 25 municipalities.

The territory of the Park consists mainly of a range of mountain chains, alternating rounded peaks, typical of the Apennines, with steep slopes with a typical Alpine appearance.

It is here, among remote valleys and glabrous mountains, that species such as the Marsican brown bear, golden eagle, Apennine wolf, deer, otter and chamois have found their refuge and habitat.

Abruzzo National Park is the ideal destination for a mountain holiday, whatever the season.

Bears, wolves, chamois, deer, roe deer and eagles are the most famous animals in the whole of the Apennines, undisputed symbols of the wild and uncontaminated nature that the Park safeguards and protects. Meeting them in their habitats, following a stalking or a chance sighting, is always a strong emotion that arouses admiration and wonder.
Let’s get to know them better!

The Marsican brown bear is the absolute symbol of the Abruzzo National Park. It is a different subspecies from the Alpine bears and it is therefore exclusive to central Italy. It is a lazy, solitary and quiet animal that lives in the forests of the Park, but also in high-altitude grasslands at the edge of the forest. Sightings of bears are not very easy, but it is certainly easier to encounter signs of their presence, such as the characteristic footprints.

A fascinating presence, although not exclusive to the Park, is the Apennine wolf. He can live alone or in small herds. The wolf is a difficult animal to spot: mainly nocturnal, during the day it takes refuge in the wildest and most inaccessible places in the Park.

Among the protagonists of the Park’s fauna is the Apennine chamois. Thanks to the establishment of the Park and careful protection, this rare species has been saved from extinction. In the Park, it is present on most of the highest massifs.

At the beginning of the 1970s, the reintroduction of deer – which had disappeared in the protected area – was carried out in the Park. It is not difficult to observe deer grazing in the less sunny hours of the day; it is important not to get too close, not to disturb them or offer them food, but to observe them silently from a distance.

The roe deer, which had almost completely disappeared from the Park’s territory, were reintroduced with the red deer in the early 1970s. These graceful ungulates live at almost all altitudes.

The place of honour among the Park’s birds goes to the golden eagle, a typical inhabitant of the highest and most inaccessible mountain ridges. In the Park, it is not difficult to spot it flying over the territory in search of prey.

Itinerary 1 – The Fondillo Valley and the Jancino Valley

The Val Fondillo integral reserve area, in the Cacciagrande and Valle Jancino areas, is one of the five UNESCO sites of the Abruzzo, Lazio and Molise National Park. This is an enchanted place: the only strip of old-growth forest in the PNALM with a constant presence of water, as it is crossed by several streams.

These wild and damp beech forests are home to rare species such as the Apennine spotted salamander and the Venus’s slipper orchid. Here the world of the beech forest also comes into contact with the rocky world of the Camosciara: bears, woodpeckers and mushrooms meet gentians, chamois and golden eagles.

The hike takes place on mountain paths and mule tracks with easy ascents and descents.

Eight hundred metres of altitude difference encompassing a succession of exciting scenery. The path that climbs from the small village of Civitella Alfedena, through the Val di Rose to Forca Resuni is magnificent and varied.

You will walk at the top of your lungs through a beech forest, admiring splendid views of Lake Barrea and Monte Petroso. From the Cavuto Pass, you can look out over the depths of the Camosciara and from the historic park ranger’s refuge you can discover the Val Canneto and the Lazio side of the Park.

The itinerary ends with a descent into Val Risione and the beech forest of Valle Iannanghera, the best places to discover the characteristics of the Abruzzo National Park and the oldest protected area in Italy.

The hike does not present any particular technical difficulties, but a good level of physical fitness is required due to the length of the route and the height difference.

In the heart of Abruzzo, there is a special path that leads to a slope from which a unique spectacle can be admired. From that perspective, Lake Scanno seems to be shaped like a heart.

All you have to do is follow the Sentiero del Cuore (Heart Trail) which, in about half an hour’s walk, will take you to a panoramic terrace from where you can admire this spectacle.

The Sentiero del Cuore starts at Lake Scanno and it is a road suitable for everyone.

For any other typical information or help, we advise you to look for the Park’s Visitor Centres. The Visitor Centres are information, education and environmental interpretation structures located in the Park’s villages. They may also include museum displays, wildlife areas and botanical gardens.

Among the largest and most important are the one in Civitella Alfedena, the one in Pescasseroli, the one in Val Fondillo and the “MOrso” (Bear Museum) in Pizzone. 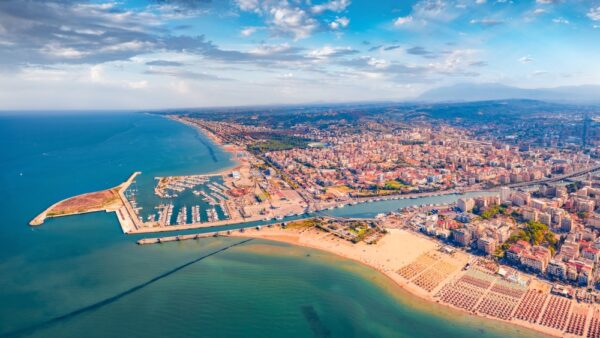 Things to do in Pescara: 7 ideas

Overlooking the Adriatic Sea, Pescara (Italy) is the most populous town in Abruzzo. In addition to being a popular seaside resort during…
By Traveling ItalyDecember 21, 2021